BOOK REVIEW: The Death of Santini 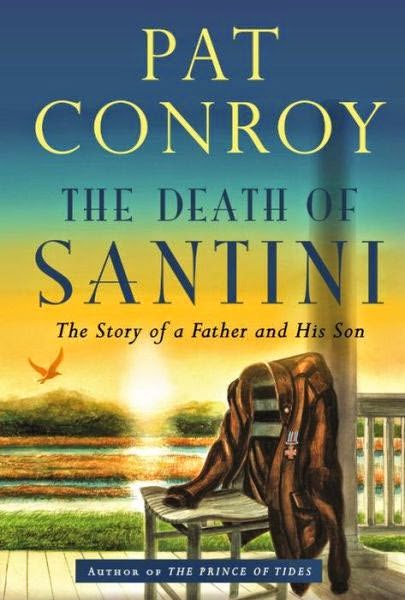 If you have ever read a book or seen a movie written by Pat Conroy (The Great Santini, Prince of Tides, etc), you owe it to yourself to read his autobiography THE DEATH OF SANTINI. As you read, you will discover the plots to all of his books have been part of his life.


My first book by Conroy was Beach Music and I was hooked by his beautiful use of language. His other books hypnotized me for the same reason; he may be the most gifted master of the English language writing today. As one reviewer put it, “Reading a Pat Conroy book is like watching Michelangelo paint the Sistine Chapel”. His autobiography is as masterful.


Pat Conroy’s father had been nicknamed The Great Santini after the charismatic trapeze artist who seemed fearless of death. Donald Conroy was a Marine Corps fighter pilot whose visits home were full of brutal acts toward his wife and seven children. Pat said that he hated his father before he knew the word hate.


The publication of The Great Santini brought Pat Conroy to the attention of the public and much critical acclaim, but because it followed his life so closely, it also caused a family that was already battered to break apart. The making of the movie may have been the start of healing between Pat and his dad. Donald was happy to be played by Robert Duvall. This was the actor who had been in the Godfather and Apocalypse Now, and if Humphrey Bogart or John Wayne could not do it, Duvall would be alright.


THE DEATH OF SANTINI should have been a book that I found too disturbing to read, let alone recommend to anyone, but I was caught up in the way an author could take a dysfunctional family that included domestic violence, sibling suicide, and mental illness, and turn it into a love poem.


Maybe this is the best way for a craftsman of words to exorcise his demons. We can all hope that since Conroy has told his complete life story there are still future books.

THE DEATH OF SANTINI is a disturbing book in many ways, but it is brilliant.
at 8:50 AM
Share