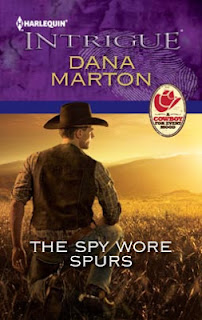 Last week the “Bug” that was making its rounds hit our house. All I wanted was the couch, a cozy blanket, plenty of comfort drinks, and even more importantly, comfort, cozy books. One genre that I enjoy for light reading is the Harlequin Intrigues. Most of them are interchangeable, but one that I read was a notch above the usual and I thought that you might want to hear about it.

THE SPY WORE SPURS was written by Dana Marton, an author with a long history with Harlequin. The setting and the plot could have been taken from this week’s newspaper.

Former army medic Grace Cordero has returned to the deserted family ranch in South Texas to scatter her brother’s ashes. She and her brother had been close and returning to the ranch is an emotional trip for her.

Hearing shots on the remote ranch one night takes her out in a storm to find Ryder McKay, mysteriously shot and left for dead. McKay is a top secret commando soldier who has been sent to the Texas/Mexican border on a secret mission. Someone is using Grace’s property to smuggle drugs, weapons, and people across the border.
At the risk of blowing his cover, McKay needs Grace to help him blend in and get acquainted with the locals. When a Mexican woman appears at Grace’s door hunting her husband and two small children, Grace becomes emotionally involved and may become a danger to the mission as well as to herself.

The story follows fairly predictable lines, but with a few twists. The characters were a little better developed than usual for this type of book. The “villain” was not a big surprise, but Martin did a nice job of giving him some personal background which helped to explain his conflict with what he was doing.

The book also has an ending that makes the reader aware that the story is not really over. Whether this was a neat literary trick or a neat trick to prepare us for sequels, we will have to wait to find out.
There is probably a reason why Harlequin Intrigue has been around for ages. They are light, readable, romantic suspense stories and like any other publisher’s series, once in a while a little gem can be found.

Email ThisBlogThis!Share to TwitterShare to FacebookShare to Pinterest
Labels: Books 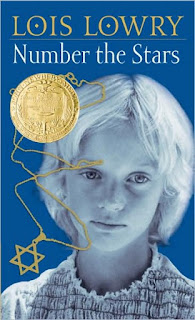 Lois Lowry is one of the most popular writers of children’s books today and rightfully so. She has written about difficult subjects in ways that children can understand. This is not to say that her books have not met with controversy. For example, The Giver, probably her best known story, has been praised by some educators and banned by others.

NUMBER THE STARS, her other Newbery Award winner, takes place in Copenhagen in 1942 and deals with two ordinary young girls, several Nazi soldiers, and the Denmark effort to save their Jewish citizens.

Annemarie and Ellen are best friends. Even though they pass German soldiers on every street corner on the way home from school, they are not aware of the danger, especially the danger to Ellen Rosen, a young Jewish girl. Ellen’s parents have to escape in the middle of the night leaving Ellen with Annemarie and her parents. Getting the Rosen family out of Denmark calls for more bravery than either girl thought she had in her.

Evan though this is a novel written for young readers, it was a good “short story” for this adult. In few words Lowry is able to bring her characters and their situation to life. Do not expect her books to have an ending without some sadness. She keeps it real and that may be the reason that she is considered to be controversial.

I love a good title, one that adds some extra meaning to the story. This is an author who seems to select the perfect title for her books. NUMBER THE STARS is taken from Psalm 147, reassuring us that God knows each star in the heavens. Although this was something that Annemarie could not understand, the reader does. The tie in with Ellen’s Star of David necklace is important, but also important is the message that each individual, no matter what his or her religion, is numbered and valued.

Lois Lowry is an author that your children should be sharing with you.
at 1:31 PM No comments: Links to this post