BOOK REVIEW: The Fault In Our Stars 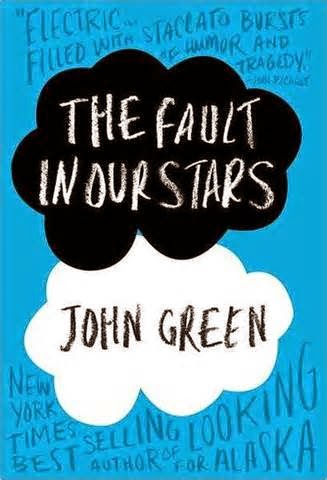 Grandparents should really listen to grandchildren. I am blessed with children who love to read and when one of them recommends an author I usually pay attention. Our granddaughter had raved about John Green but it took me awhile to get to him. I just finished his THE FAULT IN OUR STARS. I should have listened to her earlier.


THE FAULT IN OUR STARS is told by sixteen year old Hazel Grace Lancaster. Hazel spends most of her time re-reading her favorite book, An Imperial Affliction, the story of a young girl dying from cancer, by Peter Van Houten. Hazel understands why the book ends mid-sentence; either the girl dies or is just too sick to continue. She does become obsessed with what happens to the other characters in the book, especially the mother and the pet hamster.


Hazel relates to the lead character in the story because she too has been diagnosed with terminal cancer. Thanks to a miracle drug, the cancerous tumors in Hazel’s lungs have shrunk, and her time has been extended, with the help of constant oxygen tanks.


At a meeting of the Cancer Kid Support Group she meets Augustus Waters. Gus has come in support of his friend Isaac who is about to have surgery to remove the cancer in his eye which will leave him cancer free, but blind.


Gus and Hazel soon become close friends and eventually fall in love.She introduces him to An Imperial Affliction and he and Isaac soon have her playing computer games. Gus is also a cancer survivor, having lost his leg to the disease. The fact that he has his driving license at all, he says, is one more case of “cancer kid perks”


The journey through the relationship between Gus and Hazel as well as with friends and parents makes this a very good read. Hazel has the ability to understand what those who love her are experiencing and how hard it must be to be the parent of a terminally ill child.


The amazing thing about THE FAULT IN OUR STARS is that it really is full of humor. Hazel and Gus see things with an eye that mixes the silly with reality. Throughout the story they ask the questions that we all ask. Will I leave any mark on the world? Will I be remembered? and Why do people say such dumb things at funerals?


Again we have a book that is categorized as  “Young People”, but please do not think that this is just another “teen- illness” book. The author has captured the reality of what could be a mawkish, tear-jerker, to the real life of young, intelligent, witty people who just happen to have a fatal illness. After all, we know that all star-crossed lovers have something standing in their way.


I am finding that so much of the insightful writings of today are supposedly being aimed at the youth market. (think The Book Thief). THE FAULT IN OUR STARS may be another case of “youth being wasted on the young”.


John Green is definitely an author to watch. He may make you cry, but you will laugh also. And isn’t that what we want in a good read?


Now I have to check what my granddaughter is presently reading.

Postscript: Just saw the news that filming has started for the movie version of this book. That is news that always makes me nervous. Hollywood has been known to miss the point.
at 2:29 PM No comments: Links to this post

Email ThisBlogThis!Share to TwitterShare to FacebookShare to Pinterest
Labels: Books

Mary Balogh is one of my favorite Regency Romance  authors and when I found a new book with her name in large letters across the top, I quickly dropped it in my shopping cart. A closer examination showed that the title of the book was BESPELLING JANE AUSTEN. This is even better. If you are not familiar with the background of Regency Romance novels, Jane Austen actually wrote during that period of English history and she is the author most copied by today’s followers of the genre.

It keeps getting better and better. I felt that I had found a book that would pay proper homage to the great Jane Austen by an author that I love.

BESPELLING JANE AUSTEN was not at all what I was expecting, though the other authors in the anthology should have given me a hint. Colleen Gleason, Susan Krinard, and Janet Mullany are better know in the field of paranormal fiction. Still, I felt that it would be worth the try. Mary Balogh and Jane Austen were involved.

Susan Krinard was the editor of this unique collection of short stories. She invited the others to take part and simply take a favorite Austen novel and turn it into a story that included vampires, werewolves, faeries, etc. Should be easy. Right?

Mary Balogh chose Persuasion as the base for her “Almost Persuaded”. Persuasion lends itself perfectly to a story that follows two lovers through time, but never the right time for them. Balogh admits that this is not her style of writing and this may be the weakest story in the collection. It is a sweet love story, but does not fit the requirements of the book.

Colleen Gleason’s choice of the brooding Northanger Abbey  for her “Northanger Castle” gave her room to write a tongue in cheek take off of Gothic novels in general. Our heroine sees vampires everywhere, laughs at silly girls in stories who enter dark rooms in the middle of the night... alone, and is easily taken in by a handsome face and smooth manners. And, of course, it includes the dark, mysterious man who remains a mystery until the very end.

By  far my favorite was “Blood and Prejudice” by Susan Krinard. This story had me from its opening line, “It is a truth universally acknowledged, that ever decent straight guy who isn’t dead broke, is in want of a good woman”. (A line that sounded almost familiar). Set in present day Connecticut, “Blood and Prejudice” does an admirable job in following the original story. It seemed natural for the Bennet sisters to have modern careers and it really made sense, at least to me, for Mr Darcy to be a vampire.

It also made sense that Emma, who tried so hard to play matchmaker for her friends, should be moved to Washington,D.C. and be helping with a dating service that specializes in finding mates for the lonely, vampire, werewolf, or elfin.  “ Little to Hex Her”, Janet Mullany’s contribution, sticks to the original, Emma, closely... with some weird twists.

Most modern authors have to give credit to Jane Austen for their plot lines. She has stayed a classic all these years for good reasons. These short stories are excellent rip offs. They are fun, but I would guess that some of the more tongue in cheek humor will be missed if the reader is not familiar with the originals.


It always amazes me the books that just seem to jump into my shopping cart! Some good, some bad, but almost all turn out to be interesting.
at 5:51 PM No comments: Links to this post 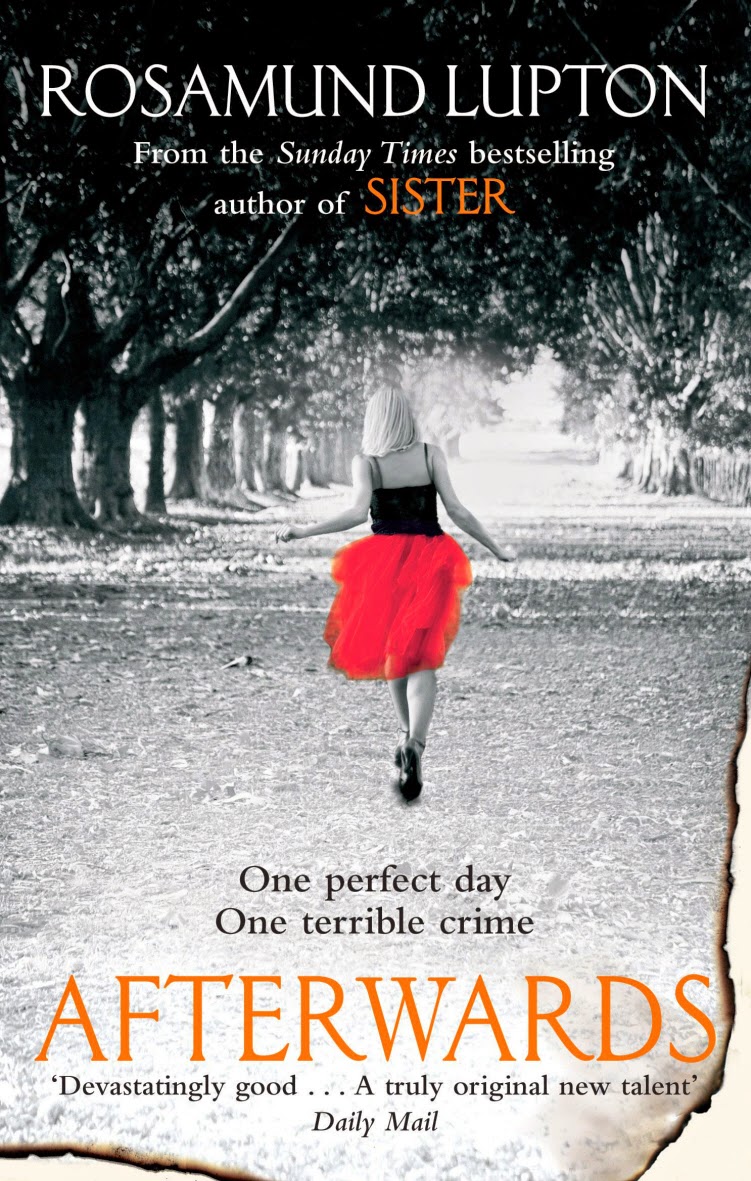 AFTERWARDS is my second book written by Rosamund Lupton and again the author kept me up all night. I thought that she could not out -do her first novel, Sisters, but AFTERWARDS is another thriller.


It started on a beautiful day, a perfect day for the students to be outdoors for their games. Grace had just given her eight year old son, Adam, permission to return to the school building for his birthday cake so that he could share it with his classmates. The building was empty except for the youngest class and the nurses suite, today being manned by Grace’s seventeen year old daughter.


When Grace turns to look at the school again, smoke is pouring from the top windows. Her children are inside the burning building. Grace rushes in to save Adam and Jenny. Later in the hospital, she learns that she and Jenny have been gravely injured and Adam has stopped speaking. All evidence points to arson. Grace has information that will help, but is unable to share what she knows with anyone and Adam may know too much.


A Rosamund Lupton novel is so full of twists, turns, and surprising characters that a fuller plot summary would be unfair to you. Grace does learn that people, even best friends, are not always what they seem and that true evil might just exist. She also learns how far a mother will go to protect her children and, maybe, how far a child will go to protect a parent.


This is a crime novel with a creative premise and a lyrical style. The contrast between the ordinary family, complete with teenage angst, and hidden evil is well done. After the fire, Grace has been faced with a horrific crime as well as a painful betrayal, but she has also learned the power of deep love.

Rosamund Lupton is an author that I do suggest that you try. AFTERWARDS may require a temporary suspension of disbelief for some of you, but in the hands of a good author, it is worth it.
at 6:08 AM No comments: Links to this post