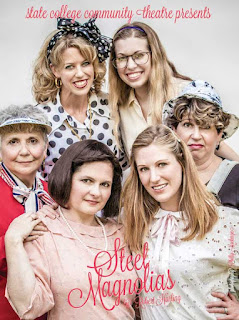 STEEL MAGNOLIAS is currently at the Boal Barn in Boalsburg. This is a play about six strong women and the success of the production depends on finding six strong actresses. State College Community Theatre found them.

Four women meet regularly at Truvy’s Beauty Salon in Chinquapin, Louisiana and along with Truvy and her new assistant, Annelle, we listen in on the gossip and learn about the private lives of these steel magnolias.

Ginger Larson was a sweetheart of a Truvy. Her love of juicy gossip was underscored by a very caring heart, a true concern for her assistant and customers. I got the feeling that Ginger was either type cast or is an exceptional actress. I am thinking that it might be the former; her sweetness came across as very natural.

Trudy’s assistant Annelle was played by Elaina Mercurio. This is a more complicated roll then an audience might recognize. Elaina grew from the very frightened, lost young girl to the mature mother-to-be with ease. Her quiet acting was a perfect foil for the drama in her customers’ lives.

Another actress who had a chance to grow was Priscilla McFerren in the roll of Clairee. Recently widowed when we first meet her, Clairee uses her love of the local football team plus her determination to make a very full life for herself. Priscilla was fun to watch as the mature member of the group who had a surprising sense of humor.

Susan Kleit had a ball as Ouiser, the group grump. Susan made good use of the stage as she became very vocal about her neighbor shooting his gun to scare off the birds and the disappearance of the blooms from her magnolia tree. Personal note to Susan: I believed EVERY word in your bio.

The evening belonged to Kristi Branstetter as M’Lynn. Kristi is enough of a pro to know when to under play a scene and when to tear up the stage. She was able to capture the love, fear and heartbreak of every mother watching.

The actual plot of the play centers on Shelby, the daughter of M’Lynn. Jocelyn Kotary is such a natural actress that it was very easy to get caught up in her story. To tell you about her progress at the Salon would ruin the dramatic ending if you are not familiar with the play.

On opening night it took the ladies several lines to settle into their parts. Nerves seem to have affected their speaking voices. They all appeared to be much more at ease once Susan Kleit came bursting on the scene.

The only problem that I had was the costuming. The Barn, as some of you know, is not air conditioned and if the location of the play, Louisiana, is added to the mix, the costuming was too warm. Black shoes, sweaters, etc. did not work. I have seen other plays that Diane Twomley has costumed and was surprised that she dropped the ball on this one.

STEEL MAGNOLIAS is such a tribute to the strong women in our lives that it should be watched regularly.  STEEL MAGNOLIAS will be playing through July 28th.

For photographs, please see Meadowlane Photography on Facebook.
at 4:15 PM